Here below we show a few re-upholstery works made on items belonging to Customers:

For obvious reasons of transport costs this service is generally provided only for projects in Northern Italy. Anyway for specific works in other regions or abroad please feel free to contact us and we will study together their feasibility.

The re-upholstering work consists of refurbishing the padding of sofas, armchairs, chairs, beds. Depending on its conditions the upholsterer carries on the total re-making of the padding or provides partial interventions keeping/re-using the intact parts. In this field it is fundamental to note the difference between traditional upholstering and modern upholstering.

If the item is antique the artisan must respect the original upholstering method and style. So, in these cases the work must be always done in the “traditional” way. Paddings made in the XVII, XVIII, XIX centuries until the first half of '900 are completely different from those made in the past 60 years. The "traditional" ones usually consist of belts in jute with or without springs knotted by hand, vegetable hair (obtained from the processing of some types of plants) or animal hair (usually horse hair), jute canvas stitched by hand, cotton wadding. So they are all natural materials, totally different from those used for modern upholstery (elastic belts and “sponge foam”). The "traditional” workmanship is considerably longer and more complex compared to modern upholstering and, if well performed, requires a considerable degree of experience.

As regards the modern upholstery, it has much more freedom. Most of them are made using “sponge foam” (technically called: flexible expanding polyurethane foam) which may be reconstructed at a much lower cost compared to the “traditional" techniques.

In any case it must be considered that also re-upholstering a modern piece still requires a certain number of hours of workmanship and the cost of this work performed on a single piece is not comparable with the cost of industrial productions carried out in series; it is obvious that industrial mass production costs are far lower than those of a craft work performed for a single piece. Moreover, in recent years, the labor cost has become fundamental, having a decisive impact on the final cost, unlike a few decades ago. A craftsman, now, can only work on items of medium-high quality; for low-cost industrial products, there is no economic advantage to execute the work for both the upholsterer and the client. In this regard the wooden structures are important: if the structure of the sofa is made of chipboard or other cheap materials it is difficult to replenish a good padding onto a non-recoverable structure, on the contrary if the structure is made of solid wood and good carpentry techniques it will be possible to reconstruct the padding even several times.

Example of an industrial mass production sofa with structure made in chipboard instead of solid wood: 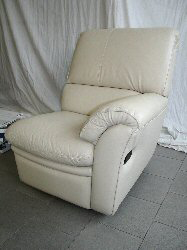 Un-nailing the leather on the armrest, it immediately displays the chipboard structure: 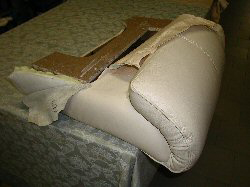 The structure of the armrest (and of the whole sofa) is made of chipboard panels simply assembled just with nails: 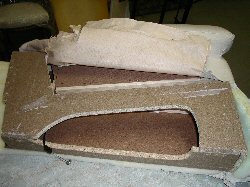 The chipboard is made using scraps of wood processing, glued and pressed to form sheets of regular thickness: 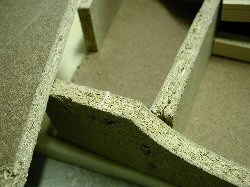 Compared to solid wood, chipboard is much more fragile and when breakages happen (as in this case) it is not very convenient to carry out a repair: 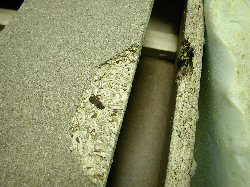 For its low cost, chipboard is widely used in industrial mass production of sofas (of a low quality). In the presence of this type of structures, the intervention of the artisan to carry out a repair is not convenient and, furthermore, it cannot guarantee that the same type of breakage won’t happen in other points of the sofa. Even the simple covering operation with new fabric or new leather is not recommended on this kind of sofas because, just un-nailing the old cover, inevitably the chipboard will damage (it "flakes" very easily) and it becomes troublesome to nail back the new cover. In summary, industrial mass production sofas are part of the so-called "use and throw" market where, once the sofa is worn, it is more convenient to simply discard it and buy a new one. 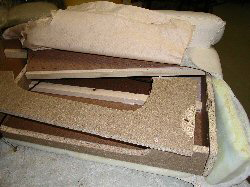 On the contrary, the following photos illustrate wooden structure for high-quality sofas that, in addition to ensuring robustness to the sofa, enables the upholsterer to reconstruct the padding even several times over decades (works made from the specialized carpentry workshop Artigiana Fusti Poltrone in Bologna, Italy): 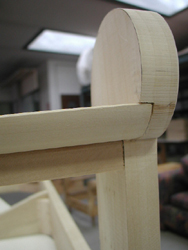 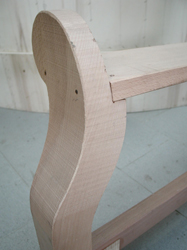 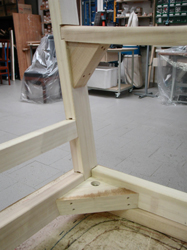 Detail of a "mortise-tenon" joint:

Detail of the reinforcing wooden corners: 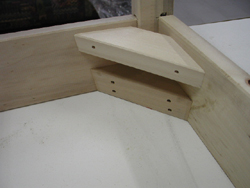 Another detail of a joint on a lateral part: 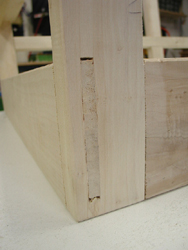 Joint on the curved part of an armrest: 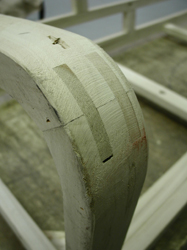 The labor cost for un-nailing and un-padding operations, which must be performed by removing every single nail from the wood, should also be considered; these works are trivial but still require several hours of labor. Sometimes, for example, it happens to un-nail the fabric and find, underneath, other two or even three layers of fabric, so there are different covers executed in subsequent periods without ever removing the old fabric: 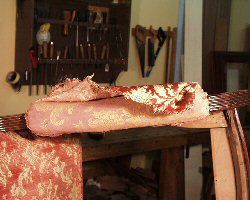 Normally, however, prior to covering with new fabric, the old one must always be removed. In this example it can be seen how the patterned velvet was nailed directly over the striped fabric to avoid the trouble and the cost of un-nailing the old one: 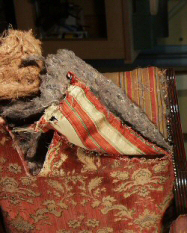 Non-professional upholsterers use inappropriate techniques and materials, just aiming to make the work presentable to the eyes of the customer and save as much as possible on manufacturing costs. An example is this little sofa, whose upholstery might seem proper to an inexperienced person and arouse no suspicion: 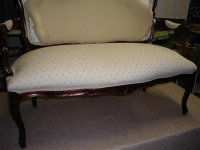 In reality, removing the cover, it can be immediately noticed that it is a work of poor quality in both materials and execution: 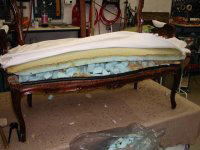 A great part of the padding was made from leftover foam curls recycled from previous works (a method that a serious upholsterer would never use): 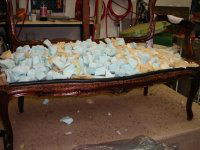